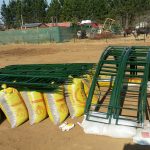 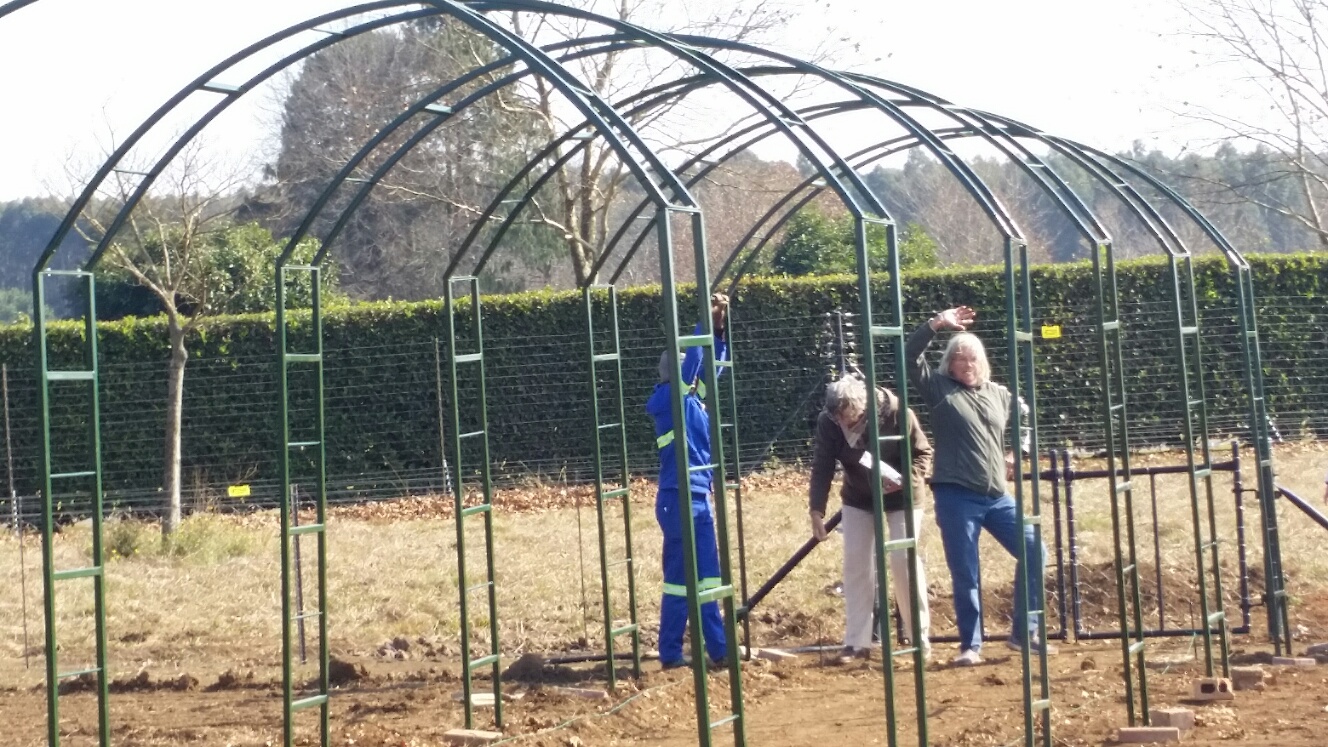 IT IS ALL HAPPENING!

We arrived at the newly levelled and fenced  Garlington  Estate land – dusty, brown and empty. A  long stick, tape measure, mallet and a large ball of thick string were our main tools along with lots of enthusiasm  and laughter.

Our first task was to  find the centre of the garden which we accomplished quite quickly . Then on to mark out a one and a half metre path around the perimeter wide enough  to accommodate two people  walking  comfortably side by side to view the roses, or  for a lawnmower or wheelchair to be easily pushed around.

Our trusty stick proved to be an excellent marker and we tried to spray paint the marks  to delineate the path but the white disappeared into the sand… we implemented Plan B and tied the  thick green string  on to short stakes, all of which had to hammered into the hard earth. As the area is 40×30 square metres this took a little time but voila! A walkway appeared out of the dust. We had to take cognizance of the archways – six at  the entrance and the three each at the middle of the other sides. “Easy”, we thought and it was……But when we completed the first two they were not  directly opposite each other! Can you imagine the comments of visiting engineers if that remained the case. The fencing that we used as a yardstick was marginally shorter than it should have been. So, much measuring later, we got it right.

Then we had to measure out the magnificent six-arch entrance. The air turned blue as we initially marked it out on the wrong side! Too much talking I guess……

The real geometrical test was yet to come – to create an oval  in the middle of the garden. Several small drawings appeared in the sand and intense discussion on circles and intersecting concentric  circles ensued.

In the end it was quite easily done by creating a huge circle that touched the end of the paths  on two opposite sides of the ground and a freehand-joining to the other two  completing the oval. It actually worked! We again had to secure our markings with green string and bricks to keep it in place dreading windy gusts that  would blow away our work, so carefully calculated!

Sounds complicated? Of course it wasn’t! Just a trifling exercise in measuring interspersed with laughing, a  few tense moments and a fair amount of pride to see the first step in creating our Heritage Garden come to fruition.