Johannesburg-Singapore-Gongzho-Nanyang or Johannesburg-Beijing-Shenzhen-Nanyang, and return – the multi flight route Kate Warr and I undertook on the way to the WFRS Regional Convention in Nanyang, China.  It was certainly a relief to see representatives of the Nanyang Convention team at the airport to meet us and transport us to the Holiday Inn.

The Holiday Inn Nanyang was the Convention venue and provided accommodation to the many delegates.  Nanyang, not being on the main tourist route in China, did not offer much in the way of the English language!    Fortunately, 400 “volunteers” had been appointed to assist with the language problem – one per international delegate with a few to spare.  These young people were studying English at a college or university and my Sophia was indeed a great help to me during the 5 days in Nanyang.

The opening ceremony was at the Nanyang World Garden Rose Garden which was also celebrating its opening.  This Rose Garden consists of a north, east and west gardens.  The East Garden being the core.  A total of 5100 rose varieties and 1.4 million plants adorn the park.  Our time was spent in the East Garden as we weren’t afforded sufficient time to explore the other two sections.  Greeting teams were all over the park, seats had been reserved for us in the 2nd tier and photographers were in abundance!  The actual ceremony was beautifully choreographed and Kate and I were “in the mood” despite the cold and slight drizzle.

Lectures commenced back at the Holiday Inn at 14h00.  The opening lecture was by Viru and Girija Viraraghavan from India.  The title of their talk was “Intrepid Roses – how roses reached Indian gardens by perilous paths, treacherous seas, from swamps and high mountains.”  Viru and Girija were one of the reasons I decided to come to Nanyang.  I have heard them talk at conventions twice before and they really are a mine of information on the rose in India.  I was also lucky enough to travel on the flight with them from Gongzho to Nanyang.  It was an interesting and informative talk and I thoroughly enjoyed their time at the podium.

Other lectures were: “The wild roses in Xinjiang and its use in breeding for cold-hardy roses” – Sui Yunji (China); “Flora fragrance of rose rugosa cultivars in rose village of Pingyin, China” – Naomi Okubo (Japan); “The different ploidy of old China roses and their use in breeding” – Ji Naizhe (China) – I am afraid I was totally lost in this “ploidy” explanation!  Ploidy is “the number of sets of homologous chromosomes in the genome of a cell or an organism…”; “The most beautiful and important rose gardens in Europe” – Bernd Weigel (Germany).  A very personal presentation and some of the delegates felt Bernd had missed some of the important European gardens. And then it was time for dinner!  A full 1st day and good reason for a sound night’s sleep.  (This was after a visit to TV station for an awards and art performance.)

Monday 29th April was a 9h00 start with the 1st lectures: “In search of eco roses” – Ping Lim (USA) and “Genetic study helps new variety breeding in roses” by Li Shubin (China).  My favourite part of the morning’s proceedings was the panel discussion on root stock uses by 6 breeders from China, USA, France and the UK.  The “general” feeling expressed was that root stock is not a popular breeder’s medium except in China.  China’s amazing standard roses or tree roses could not be produced without the use of root stock.

That afternoon we visited 2 rose gardens and nurseries and finally the Nanyang Rose Expo Garden.  This is the largest rose planting base in China and they supply 80% of the domestic market.  It is planted over a 200ha area, began in 2010 with a total ‘to date’ investment of 50 million Yuan.  The tree roses in the garden were absolutely amazing.  Even Kate at her height of 1.78 meters was overshadowed by these roses!

Tuesday 30th lectures started at 8h30 with “The creation of new roses as designed” – Jim Sproule (USA) another presenter I heard in Uruguay and Denmark and thoroughly enjoy; “The great David Austin’s English roses” – Michael Marriot (UK).  Michael had the most beautiful pictures of David Austin roses and gardens.  Further lectures included “Roses in the era of internet” – Jiang Zhengzhi (China) and “40 years among my roses” – Dominique Massad (France).

In the afternoon we revisited the Nanyang World Garden Rose Garden and had some retail therapy at a jade market.

In the evening it was the gala dinner and handover of the WFRS flag to India.  Impressive, precise handover and a very pleasant dinner.

May 1st was a full day tour of the Dinosaur Relics Park, Neixiang County Magistrates’ Office and the Sheqi Shan-Shaan Guildhall in Shedian Ancient Town.  Being a public holiday, there were many Chinese families visiting these sights especially the Dinosaur Park.

Presentations were made of future conventions including Kolkata, India; Adelaide, Australia and the Heritage Rose Conference planned for in Brussels, Belgium.  All very well done and informative.

May 2nd  saw me starting my return journey to South Africa.  A very interesting and enjoyable visit to Nanyang, China.

(More detailed accounts will be given in the next ROSA Annual.)

After a very hectic and most enjoyable convention in Copenhagen, 9 of the 22 South African delegates, joined the post- convention tour of about 70 people to Sweden.  The Heritage Rose Society members were Monika van Heerden and her husband Colin, Claire Meyer and her husband William and Sheenagh Harris. Henny Johansson, President of the Swedish Rose Society gave us a great welcome and travelled with us for the 4 days of this well organised and most pleasurable finale to our time in Scandinavia.

From Denmark to Sweden the route took us over the Øresund Bridge which is nearly 8 Km long and includes a tunnel under the water to Skåne and on to the Rose Garden and open-air museum of Fredriksdal in Helsingborg. Lars-Ake Gustavsson, well known in the rose world, was our guide among the collection of 280-300 genotypes of the most valuable old Swedish garden roses, two of which are depicted below…sorry no names!  The formal garden with old roses tumbling over arches was particularly beautiful.

After tea and coffee with delicious eats made by the Rose Society members, we boarded our comfortable bus to Gothenburg Rosarium on the West Coast of Sweden.

After a night in a comfortable hotel and a delicious dinner we were ready and eager for the 2 private gardens to be visited on Day Two.  The first garden overlooks the sea at Dramsvik, near Ljungskile.  Our generous host from the Swedish Rose Society had the tea table groaning with homemade eats including Eggoost which could have been mistaken for pudding. It is a traditional dish served in this part of Sweden.

Over another long bridge to the island of Orust for the next private garden at Lunna.  It was hot with unusually high temperatures and our host had glasses of cold elderberry cordial to quench our thirst. We were given a picnic lunch that we enjoyed with rose friends in this pretty garden.

The afternoon was spent at the Gothenburg Botanical Gardens which were planned by the local municipality and opened in 1923.   I did’t find any roses but enjoyed the many orchids and disas in the glass  house, including plants found in South Africa.  We had a special dinner lasting 2 hours at the Gothenburg Opera Restaurant that night.

Each day in Sweden we traveled through agricultural countryside with atractive farm houses, mostly wooden, painted in pastel colours and as we hopped from island to island there was often a view of the sea.  Many fields were brown due to the lack of rain and high temperatures. Our first stop on day 3 was an 18th Century estate – Gunnabo House with a formal garden surrounding the mansion and a productive and interesting vegetable garden. 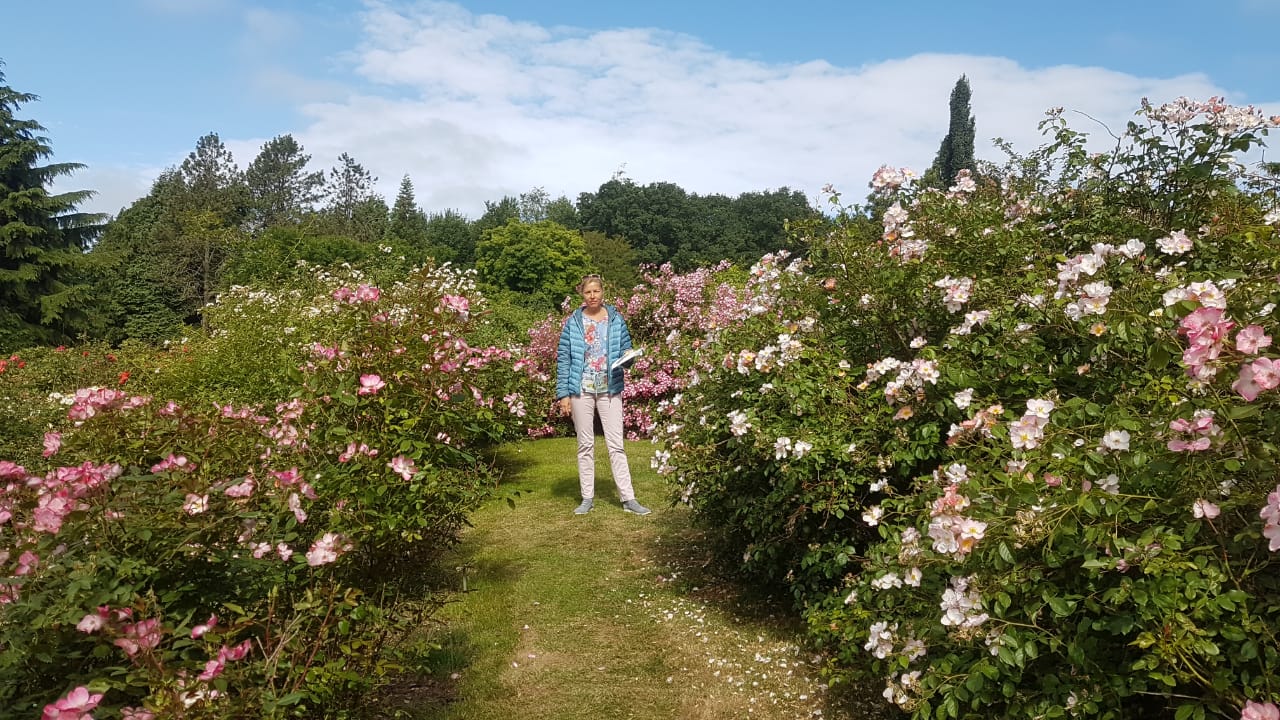 Text and photos by Claire Meyer

On the 21st June 2018, my husband and I had the great privilege, together with 20 other South Africans to attend the World Rose Convention in Denmark.

There was a pre and post tour option offered before and after the rose conference.  We jumped at this ‘once in a life time’ opportunity. The tours certainly exceeded our highest expectations.  As we experienced and saw so much during this week, I can only touch on some of the highlights for this article.

On the 22nd June, we left Copenhagen for Torben Thim’s nursery located on Løve Mark.  The nursery was founded in 1930 by Valdemar Pedersen.  Torben Thim took over the nursery in 1979 and has since developed and refined this unique collection of roses. Thim’s nursery is truly worth a visit and not only for the roses but the entire, park-like grounds. We spent the morning enjoying Thim’s vast knowledge of plants and roses.

After lunch we headed for the small island of Als, where we visited Hyldebjerggård – a truly magnificent garden. Ejnar Jorgensen, the owner is meticulous with no shortage of attention to detail. Walking around this garden was a totally mesmerizing experience. All the roses were in full bloom – combinations of Hybrid Tea’s, Old Garden Roses, modern roses and climbers. This garden has 775 roses of 440 different varieties.  It was here that I realised how important heritage roses are and how they complement all the other roses.  It was amazing to see how Mr Jorgensen, in his small garden, with careful planning, had incorporated so much, especially the old roses on the outskirts.  It was truly a memorable visit. This was the first day of many beautiful outings.

As we continued our way, the gardens seem to become more and more spectacular. Another outstanding garden was ‘Rudolph’s Place’ also on the island of Als. Marianne, the owner, is living her dream of a big and luxuriant romantic garden filled with the most beautiful flowering roses, perennials, bushes, trees and annuals.  A place of harmony with

small lakes and streams.  Today she has over 700 old garden roses, ramblers, climbers, David Austin and other modern roses in all scents and colours. Here I noticed how she had grown old roses into old pear and apple trees giving a most striking visual effect.

Another interesting and old garden is the Geographical Garden in Kolding.  This is an educational park and botanical garden.  The gardens have thousands of roses, many being old varieties.  After spending a short time viewing the modern roses, I was drawn to the magnificent and expansive old rose collection.  All the roses have name plates which made

identification easy as many of the rose bushes had finished blooming. The number of different varieties was mind-boggling.

I cannot describe how marvelous this tour was.  I learnt so much, especially about old roses and how to incorporate them into garden design.  To top it all, the weather was unbelievable – very unusual and according to the Danes, the best summer in 100 years!