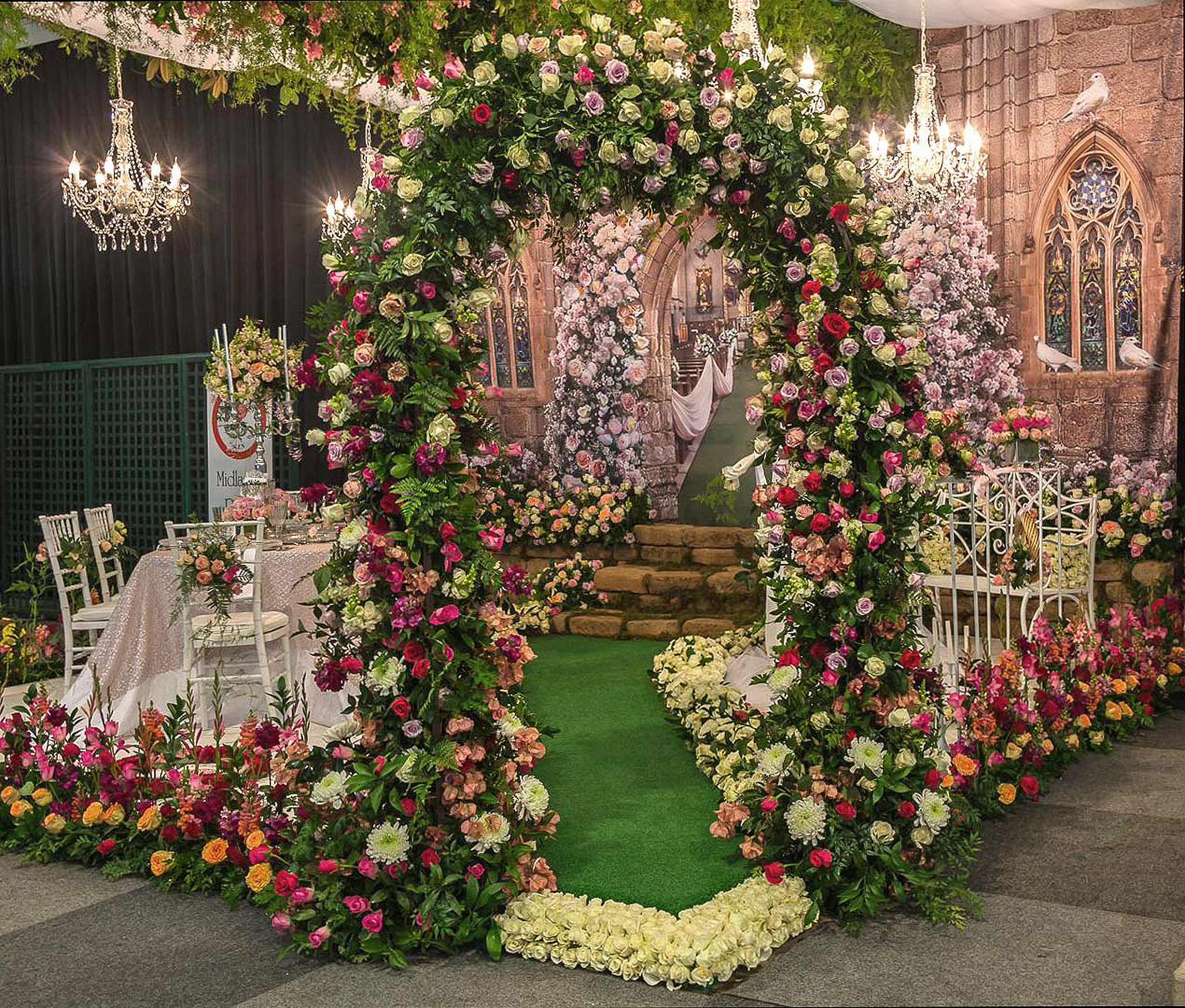 The floral arch ‘entrance’ to the exhibit. Photo-Susan von Zuilekom

The theme for this year’s Witness Garden Show was ‘Articulture”.  I googled it to see what that meant. Briefly, is using plants and flowers in different types of arrangements to create some form of art. But what to do?? Then I thought about the Royal wedding (Meghan and Harry’s) and that magnificent arch outside the church at Windsor Castle. We had to recreate that and of course with weddings, you do use flowers in different ways.

A sub-committee was formed with Susan von Zuilekom, Dawn Pellew, Louise Arthur and Mary-Anne Elstob and they all agreed that a wedding was our answer. Susan spent hours on her computer, ‘photo-shopping’ old churches and then painstakingly putting photos of roses from her garden to create the arch. She created a masterpiece!!

I contacted Flamingo Flowers in Kenya and they once again donated 2500 roses!!! Elizabeth Thornton-Dibb agreed to transport the roses from Johannesburg to Maritzburg on the Tuesday, collecting them from the South African agent in Krugersdorp as well as fetching more greenery from the Johannesburg market.

I contacted member, Sandra Tretheway from Farmgirl Flowers in Wartburg and asked if she would like to join the sub-committee. She agreed.

While we were debating where and how we would build the floor, she suggested doing it on their farm. From then on things changed and only got better and better!!

We have for years done everything when preparing our stand, from sawing wood, hammering in nails, building walls, plastering walls, fetching, carrying, pushing, pulling. You name it, we did it! Sandra Tretheway arrived with her staff who did all these things for us. I suggested a small ‘hanging thing that they have at weddings’ over the table. Sandra asked why just over the table but why not over the whole stand and so it was made on the farm, brought to the show, and hung up.

We arranged the flowers all around the edges and in the centre with the 2 sides draped. Her staff then hoisted this huge steel contraption up. She also supplied us with more foliage, more roses and more flowers.

So many members arrived to arrange the stand and when it was completed, it took your breath away. It was magnificent!!! The public loved it, we loved it and as Nancy Gardiner said, “For impact you should have got 38 out of 35!”.  But the remarks and accolades we received were wonderful. As well as receiving a Gold, we won the People’s Choice by a huge majority!!

My thanks to everyone involved in creating this masterpiece, but especially to Susan for her backdrop and Sandra for her huge contribution. A magnificent team effort!!